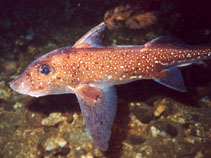 Northeastern Pacific: west coast of North America from southwestern Alaska to Baja California, Mexico, including the Gulf of California, and Costa Rica.

This species is distinguished by the following characters: short and bluntly rounded snout; oral and preopercular lateral line canals not sharing a short common branch from the infraorbital canal; anterior edge of dorsal-fin spine non-serrated; anterior and posterior regions of second dorsal-fin considerably taller than the middle region; pectoral fins when depressed do not reach beyond to origin of pelvic fins; no anal fin; caudal-fin axis horizontal with the fin nearly symmetrical, epaxial and hypaxial lobes equal sized; coloration brown or reddish brown with small white spots on head and trunk (Ref. 97389).
Found near the bottom, from close inshore to about 913 m (Ref. 2850). Abundant in cold waters at moderate depths. Feed on mollusks, crustaceans and fishes (Ref. 37955); also echinoderms and worms (Ref. 28499). The spine can be dangerous and cause a painful wound (Ref. 2850). Fishers are reputed to fear the jaws of the ratfish more than they do the dorsal spine. Its flesh is edible but bland and leaves an unpleasant aftertaste (Ref. 28499). The liver was used as a source of machine oil (Ref. 28499).

Distinct pairing during copulation (Ref. 205). The female extrudes two eggs at a time (each contained in a capsule) and may take up to 30 hours to extrude all her egg cases, which then hang from her body on a long filament for another 4 to 6 days. The egg cases end up planted vertically in the mud or just lying with filaments entangled on the bottom. Females extruding egss can be found year-round (Ref. 28499).

Entered by Froese, Rainer
Modified by Luna, Susan M.
Fish Forum
Sign our Guest Book
Back to Search
Random Species
Back to Top