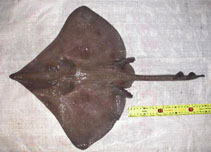 This species is distinguished by the following set of characters: the dorsal surface of disc is brown purplish with no distinct ocelli or blotches margined with dark brown on pectoral and pelvic fins; the upper surface of the disc smooth except few small spinules scattered on tip of snout; presence of ocular thorns and absence of scapular thorns; single nuchal thorn may be either present or absent; one median row of 10 to 24 small caudal thorns; the dorsal and caudal fins scattered with very few spinules; 1-2 interdorsal thorns; tail relatively long and thin, approximately half the total length; ventral surface of disc as dark as the upper side, smooth except few small spinules scattered on tip of snout; interbranchial space with no prickles (Ref. 79571).
According to the capture localities of the type specimens, Dipturus argentinensis appears to have a restricted range distribution occurring in the central and southern Patagonian region on the southwest Atlantic. No recorded specimens have been reported northwards 45º S. The region where the type specimens of the Argentine skate were collected is dominated by sub-Antarctic cold-temperate waters with low salinity. These waters have a predominantly NNE flow and form the Patagonian Current (Brandhorst & Castello 1971). Range temperatures and salinities of the localities where the specimens were collected were 5.9-9.38ºC, and 33.24-33.64 ups, respectively. These physical characteristics agree with the Magellanic Biogeographic Province where the specimens have been captured (Ref. 79571).