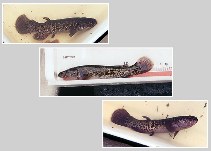 Upstream movement appears to coincide with a rise of water temperature to 10° to 15°C (Ref. 3829). Females normally contain two sets of eggs, the smaller group presumably being the set which will be spawned the following year. Females deposit 40 to 300 eggs, the number increasing with size. A female probably spawns over a period of several days, possibly longer, with only a few eggs being extruded at each spawning act. (Ref. 27547).

Entered by Froese, Rainer
Modified by Luna, Susan M.
Fish Forum
Sign our Guest Book
Back to Search
Random Species
Back to Top