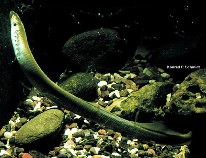 Diagnosed by having two dorsal fins connected at the base, oral disc narrower than head, usually blunt disc teeth, 2 supraoral teeth, usually 2-2-2 lateral circumoral teeth, usually 20-24 posterior circumoral teeth, usually 7-8 infraoral teeth, usually 67-73 trunk myomeres. Coloration with lead gray to slate blue above, white or silver white below, yellow fins, dark gray to black blotch on caudal fin, no black on lateral-line pores and breeding adult is olive green or pink-purple to shiny black above, and black stripe at base of dorsal fins (Ref. 86798). Other adult diagnostic features: 10.3-21.7 (exceptionally, 26.0-35.4) cm TL and wet weight 2.8-16.2 g. Body proportions, as percentage of TL (based on 329 specimens measuring 10.3-21.7 cm TL): prebranchial length, 10.4-13.7; branchial length, 9.0-11.9; trunk length, 46.7-53.5; tail length, 24.0-32.3; eye length, 1.2-2.6; disc length, 3.2-6.0. Urogenital papilla length, as a percentage of branchial length, in 44 spawning males measuring 14.6-21.4 cm TL, 4.5-16.7. Trunk myomeres, 64-74. Dentition: supraoral lamina, 2 unicuspid teeth, but occasionally a third small cusp is present on the bridge; infraoral lamina, 6-10 unicuspid teeth; 3 endolaterals on each side; endolateral formula, typically 2-2-2; 3 rows of anterials; first row of anterials, 4-6 unicuspid teeth; exolaterals usually absent, (Kott (1974) reported on the presence of 1-2 exolaterals, on either or both lateral fields in 21% of specimens examined); single row of posterials with 20 unicuspid teeth; transverse lingual lamina u-shaped with 15 unicuspid teeth, the median one greatly enlarged; longitudinal lingual laminae each with 5-8 unicuspid teeth. Marginal membrane vestigial. A small gular pouch occurs in males. Velar tentacles, 5-9, with tubercles. Body coloration (preserved), uniformly slate brown on the dorsal aspect, progressively paler on the lateral aspects, and much paler on the ventral aspect. Lateral line neuromasts darkly pigmented, at least the ventral ones. Gular region darkly pigmented. Second dorsal fin with a dark blotch near the apex (38% of individuals) or not (62%). Extent of caudal fin pigmentation, 1% to <25% (44% of specimens), 25% to <75% (26%) or, 75% or more (30%). Caudal fin shape, spade-like. Oral papillae, 18-35 (Ref. 89241).
Mainly associated with stable, high quality, coldwater habitats. Ammocoetes and adults are most abundant in clear, permanent, unpolluted, pool-riffle streams where sand-gravel substrates predominate and summer flows are 0.3-4,400 m3/s and summer water temperatures 14-22.5 ?C. In Michigan, ammocoetes have been reported in lentic habitats up to 450 m from the presumed originating stream, at water depths 1-16 m, where substrates vary from sand-silt, with or without detritus, to gravel-rubble-sand (Ref. 89241). Adults occur in gravel or sand riffles and runs of creeks and small to medium rivers with strong flow; usually in clear water. Ammocoetes are found in sandy or silty pools (Ref. 5723, 86798). Non-parasitic (Ref. 1998, 89241). Semelparous (Ref. 1998). Spawning adults can be found in streams or lakes. Larval life lasts 4.5 yrs or more based on length-frequency analysis. Diet of ammocoetes is organic detritus, diatoms (11 genera), and desmids (one genus). Metamorphosis occurs between mid-August and October in Tennessee. Duration of adult life is about six months. However, three reports (Manion and Purvis, 1971, Vladykov and Kott, 1980a, Cochran, 1997) of seven adults measuring 26.0-35.4 cm TL, exceeding the maximum reported larval length of 24 cm TL, have been interpreted as an indication in this species of facultative feeding, either parasitically or perhaps on fish eggs or organic detritus, in the adult stage. Between metamorphosis and spawning it spends most of its time hidden under stones. In Michigan, the spawning period is from 20 April to 26 June, at water temperatures between 6.7-20.6 °C, with peak spawning activity in early May. In Québec, peak spawning activity occurs at a water temperature of 17 °C. In Tennessee, the spawning period is in March and in Delaware, it is from 28 March to 4 April, at water temperatures between 6.8-12.0 °C. Nests are built in streams with gravel and cobble substrates having 1.5-18 m width, 15-61 cm depth, and 0.1?5.2 m3/s flow. A typical nest is 16 cm in diameter. Up to 14 spawning lampreys have been found in a nest. The sex ratio is usually 1:1 and there are no significant differences in the length and weight of spawning males and females. Fecundity, 1,327-5,185 eggs/female and relative fecundity, 274-531 eggs/g body weight. Egg diameter, 0.94-1.19 mm. Eggs are spherical, adhesive, and demersal with color from pale yellow to light green. Hatching occurs 2-3 weeks after fertilization. Average length at hatching, 2.6 mm TL. Mean length at age 1 is 38 mm TL. There are reported occurrences in Michigan of communal spawning of American Brook Lamprey with Sea Lamprey (Carp Lake, Pine, and Pentwater rivers), of American Brook Lamprey with Chestnut Lamprey and Sea Lamprey (Betsie River), and of American Brook Lamprey with Silver Lamprey and Sea Lamprey (Carp Lake). In the Laurentian Great Lakes Basin, it has been negatively affected by control measures directed towards Petromyzon marinus, except for the chemosterilization of males, which affects only the latter species. Vladykov (1949) reported that in the province of Québec, Canada, ammocoetes were at the time extensively sold at $0.50 to $1.00 Canadian per dozen as bait for sportfishes (Ref. 89241).

Semelparous (Ref. 1998). The female attaches with her oral disc to a rock at the upstream end of the nest. The male attaches to the back of her head using his oral disc and wraps his tail around her trunk region in such a way as to have each others urogenital papilla in close proximity and through muscular contraction of his body assists in the extrusion of the eggs. They vibrate vigorously for a few seconds. This results in the release of their gametes and disturbance of the substrate, which partially buries the fertilized eggs (Ref. 89241).