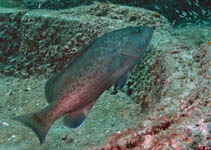 Western Atlantic: North Carolina, USA (with juveniles occurring as far north as Massachusetts) to the Yucatan Peninsula, Mexico. Rare in Bermuda; one record in Cuba; also reported from eastern Brazil.