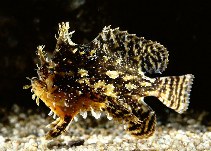 Indian Ocean: tip of South Africa eastward to Indian and Sri Lanka, including the Red Sea, Madagascar, Réunion and Mauritius. Western Pacific: Hokkaido to tropical Australia (as far south as Perth in the west and Sydney in the east), including Taiwan, Philippines, Moluccas, southern Papua New Guinea, Guam, Tonga, New Caledonia and New Zealand; Mariana Islands in Micronesia (Ref. 1602). Occurrence in the eastern Pacific remains problematic. Northwest Atlantic: Canada (Ref. 5951). Western Atlantic: Gulf of Maine to the mouth of the Rio de la Plata, Uruguay. Eastern Atlantic: Azores and off West Africa; record from Vardø, northern Norway (Düben & Koren 1846) is based on a straggler taken northward by the North Atlantic and Norwegian currents.

Oviparous. During courtship, the male follows the female closely then both rush to the surface to spawn (Ref. 205). At this point, eggs are produced in a gelatinous floating mass or 'raft' and inseminated by the male. The eggs remain embedded in this raft until hatching (Ref. 240).