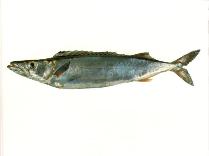 Southwest Pacific: off southern, southwestern and southeastern Australia, Tasmania and New Zealand. Occurrence records from Madagascar and Japan need to be verified.

Dorsal spines (total): 18 - 19; Dorsal soft rays (total): 16-19; Anal spines: 2; Anal soft rays: 13 - 16; Vertebrae: 36. Body entirely scaled at over 25 cm SL. Lateral line branching below the 5th to the 6th spine of the first dorsal fin. The upper branch reaches beyond the origin of the second dorsal fin, usually ending between the 8th to the 12th soft ray. The lower branch runs mid laterally, undulating above the anal-fin base. Body is bluish above, silvery below, a black blotch distally on two anterior membranes of the first dorsal fin, the rest of the fin is grayish.
Found in schools on continental shelf and slope. They are normally caught close to the sea bed but probably move into midwater at times (Ref. 28786). Juveniles are pelagic, adults also occur near the surface off Tasmania and New Zealand. Dense schools of pre-spawners migrate along the continental slope at about 400 m during winter (Ref. 9563). Feed on fish, squid and crustaceans. The flesh is of good edible quality and especially tasty when smoked. In Australia, the eastern gemfish stock has been subjected to a prolonged period of poor recruitment which started in 1989 (Ref. 28843, 28786). This event resulted in a very significant decline in the gemfish resource. In Australia, efforts are now being channeled towards the recovery of the fishery.

Larvae are caught in inshore waters which may indicate that gemfish move onto the shelf to spawn, or currents carry larvae in from offshore spawning grounds (Ref. 28786).

Entered by Agustin, Liza Q.
Modified by Kesner-Reyes, Kathleen
Fish Forum
Sign our Guest Book
Back to Search
Random Species
Back to Top