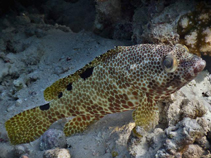 Indo-West-Pacific: East coast of Africa to the Line Islands. Except for its occurrence along the African coast (Zanzibar, Tanzania to Ponta Zavora, Mozambique) it seems to be primarily an insular species, occurring at most (probably all) of the islands of tropical Indian and west-central Pacific. Not known from the Red Sea, Persian Gulf, Sri Lanka, Philippines, Taiwan, Japan, or Australian waters (however, it is found at Rowley Shoals off Western Australia).

Entered by Binohlan, Crispina B.
Modified by Valdestamon, Roxanne Rei
Fish Forum
Sign our Guest Book
Back to Search
Random Species
Back to Top