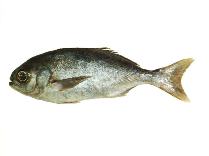 In Australia, spawning appears to be correlated with water temperature and nutrient upwellings (Ref. 7129). It appears that mature fish move up the continental slope into shallow depths (320-400 m) and aggregate in specific grounds for spawning (Ref. 6390). There is no information on the number of eggs blue eye produce nor on the egg and larval stages of their life history (Ref. 6390).