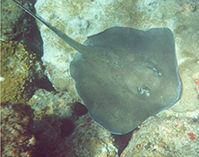 Issue
Eastern Atlantic populations of Bathytoshia centroura refer to Bathytoshia lata according to Last et al, 2016 (Ref. 114953). Species distribution will be corrected as soon as possible;

Western Atlantic: antitropical; from western and southern USA and Brazil to Argentina; including the Gulf of Mexico. Eastern Atlantic populations refer to Bathytoshia lata (Ref. 114953).

Diagnosis: Large specimens of Dasyatis centroura are recognizable by their thorny tails, by the large size and wide spacing spacing of their mid-dorsal bucklers, and by the conspicuous tubercles or bucklers on the outer parts of their discs; in smaller specimens the large tubercles have not yet developed on the tail (Ref. 6902). It differs from Dasyatis sabina, D. guttata and Himantura schmardae in the shape of disc; it resembles Dasyatis say and D. americana in shape of disc, but it can be distinguished from D. say by the fact that the tail lacks any trace of a cutaneous fold above, and from D. americana by its much narrower ventral tailfold (Ref. 6902).
Dasyatis centroura is a coastal species (Ref. 81259), found over sandy and muddy bottoms (Ref. 3169). It feeds on bottom-living invertebrates and fishes (Ref. 3169). Ovoviviparous (Ref. 6901). Wings marketed fresh, smoked, dried-salted; used for fishmeal and oil. Harmful to shellfish banks; dangerous to bathers and fishers due to its poisonous spine. May attain well over 100 cm TL. Warm season visitor to coastal waters (Ref. 6902).

Exhibit ovoviparity (aplacental viviparity), with embryos feeding initially on yolk, then receiving additional nourishment from the mother by indirect absorption of uterine fluid enriched with mucus, fat or protein through specialised structures (Ref. 50449). Gestation about 4 months with 2 to 4 young produced in autumn and early winter (Ref. 6901). Distinct pairing with embrace (Ref. 205).

Entered by Froese, Rainer
Modified by Capuli, Estelita Emily
Fish Forum
Sign our Guest Book
Back to Search
Random Species
Back to Top